There is a difference; A Cap does not have a brim where as a Hat usually has a brim. A Cap can have a peak as with Flat Caps, and Chauffeur Caps, or a Cap can just be a simple crown shape without a brim or a peak, such as Bearskin Cap or a Military Pillbox Cap.  A cap is usually associated from Latin Pileus, where as a brimmed hat was more frequently termed a Petasus or Causia.

Headdress vs Headwear vs Headgear

Headdress is considered more formal. As in you have a dress-code, and with the Military you have various 'orders' of dress. The British Military frequently uses the term Headdress e.g. The command: The Parade will remove headdress, Remove...Headdress! Though if only Royal Navy personnel are present, then the command "Off Caps / On Caps" may be used.

Headwear is considered general all-encompassing terms, sometime it is considered more applicable to products from a supplier (as in you the phrase "Show me your wares" though spelt differently!). Headwear also covers items not consider formal headdress e.g. a knotted handkerchief worn on head down at the seaside!

Headgear is a term that can be a combination of headwear and equipment or other items that have a primary function that are worn on the head, such as a Scarf, Goggles, Helmets (ballistic, riding, skiing etc), advertising/gimmick items worn on head such as alien party headboppers! 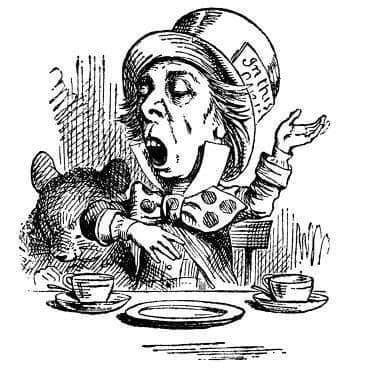 The phrase is known to be in use around 1837, many years before the Hatter character in Lewis Carroll's Alice in Wonderland became popular when it was published in 1865. The Phrase The Mad Hatter does not appear in Alice in Wonderland at all. He is merely called The Hatter. Though he does preside over the Mad Tea Party and the Cheshire Cat describes the Hatter and the March Hare as "they're both mad". 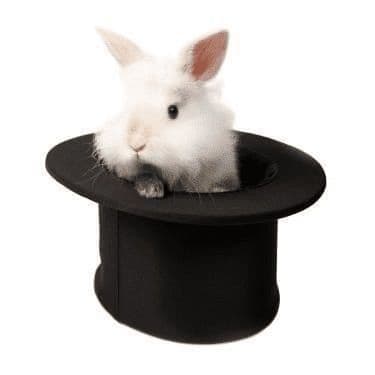 The French magician, Louis Comte was the first noted magician to pull a rabbit out of a top hat in 1814. Comte, was called "the Conjurer of the Three Kings" as he entertained Louis XVIII, Charles X, and Louis-Philippe, it is unknown for certain if it was a white rabbit or not! 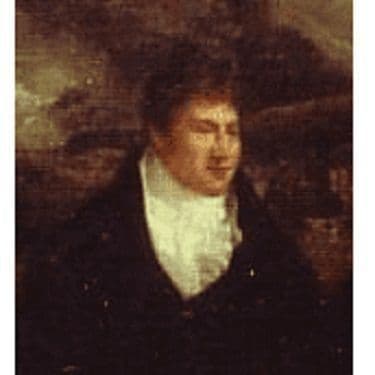 The first Silk Top Hat was documented of being made from a silk shag (plush) in England by the Hatter George Dunnage in 1793. His patent "Water-proof Hats, in Imitation of Beaver" was awarded the next year in 1794. The silk hat as we know it today, with a hard gossamer shell with a covering of silk plush became de rigueur in the early to mid 1800ies. Who invented the first Felt Top Hat is still unknown.

Top Hats can be made from many different materials some of the first were made from beaver or other types of felt, though top hats have also been made of straw, leather and even wood. Initially they were not called Top Hats, but other names such as: Beaver hats, high hats, tall hats. From about the middle of the 19th Century the name Top Hat became part of our vocabulary, about the same time as the bowler hat was developed, most probably as people needed descriptive to distinguish between the two styles of hats made from the same material. 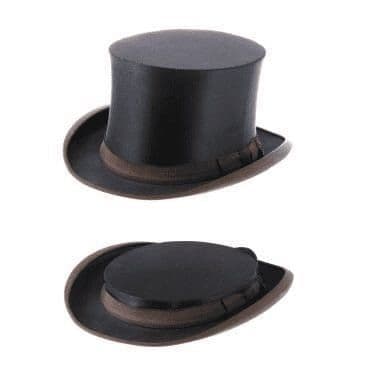 The Collapsible Top Hat (a.k.a. Opera Hat or a Gibus) was designed for travelling and storage. The First Collapsible Top Hat in England predates the more well-known French Gibus inventions; It is credited to the Hatter Thomas Francis Dollman who invented "An elastic round hat, that may be made of beaver, silk, or other materials" in 1812.

Initially the Collapsible hat was geared for Gentlemen who travelled, and not specifically the Opera or Theatre even though the popular name Opera Hat was used to describe it from early on. Predominantly made in black silk (either in a dull grosgrain fabric, or a shiny satin) they can be made in many colours. Whilst associated with white-tie evening dress code, they still can be used Royal Ascot daytime Morning Dress as are very practical if travelling as could be fitted in overhead storage when flying. 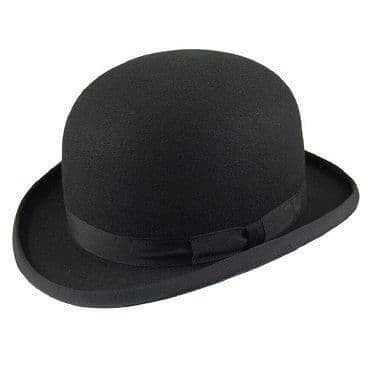 The Bowler was manufactured in 1849 by Thomas and William Bowler, hat makers in Southwark. It was created for Mr Coke a customer of Lock & Co, as a hardened domed hat to protect gamekeepers. In America the bowler became known as the Derby where it was commonly worn at the famous race.

The Bowler is still used for morning dressage wear, carriage driving, judges and stewards at country shows and other Events. It is also required as proper order of dress for the Guards and also Cavalry regiments for remembrance events.

A tall crowned version of a bowler with straighter sides and flattish top called a Cambridge Bowler was also created in the late 1800ies and was famously worn by the character Odd-Job in the James bond movie Goldfinger, and also was favoured by Sir Winston Churchill who nicknamed it a Bowker hat. 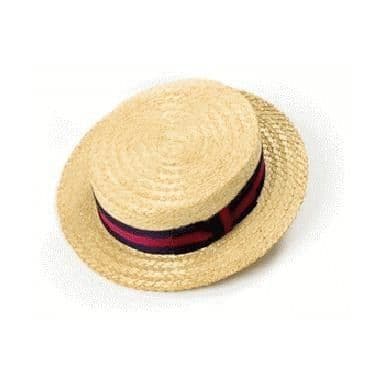 The boater can be considered a flat crowned, flat brimmed straw top hat, the origins of the modern straw hat come from the sailor’s hat, made popular by The Royal Navy's Jack Tar hat of the latter part of the nineteenth century. Prior to being called a boater, the the hats were merely called straws, or a straw plait hat, they were sometimes also called a Leghorn Hat> (Hats from Livorno, western coast of Tuscany, Italy).

The term boater took some time before it became commonplace possibly was not used until the early part of the 20th century when it became fashionable for gentlemen to wear them out boating. They are still traditional headdress to be worn when attending Henley Royal Regatta as part of The Season. 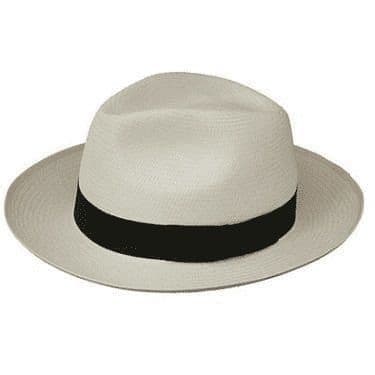 A traditional brimmed hat from Ecuador made from the plaited leaves of the Toquilla plant (Carludovica palmata). Commonly called a straw (Paja) hat, its popularity increased when President Theodore Roosevelt visited the Panama Canal during construction wearing this style of hat. The back band is traditionally a Black Silk - the sign of mourning for Queen Victoria who died in 1901.

There are two main manufacturing regions in Ecuador: Montecristi and Cuenca. Montecristi are generally considered the premium hat, though it ultimately depends of the expertise of the weaver, and actual quality of the weave.

Panamas are great for the summer and are still traditional for Lords, Wimbledon and Glorious Goodwood. 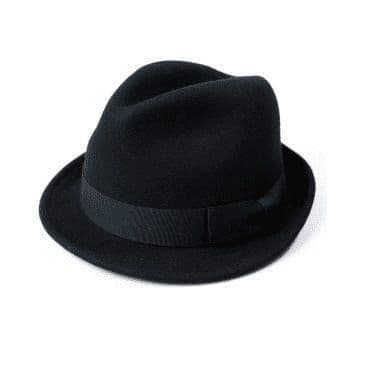 Whilst the name can be traced to the heroine "Trilby" O'Ferrall in a play adapton of George du Maurier's 1895 Novel, who wore the specific style of hat on the stage; The hat was obviously made prior to the play, in order for the person to wear it on stage.

The Trilby style is traditionally a felt hat, but can be also made in straw or cloth. It is a short brimmed hat with a creased crown and sloping sides and two dents either side at the front. It possibly can be traced to the "Tyrolean" hat as the name is very similar sounding, and is likely to have been evolved rapidly from "Tyrolean" to Trilby in the post World War One era when it was probably impolite to talk about anything Germanic due to anti-German sentiment (Shhh! Don't mention the War!)

The Trilby was famously used by Jake and Elwood Blues in the film The Blues Brothers (1980). The Trilby remains a firm favourite of hat wearers to this day, and is customary to wear them to racing Cheltenham and during the National Hunt season. 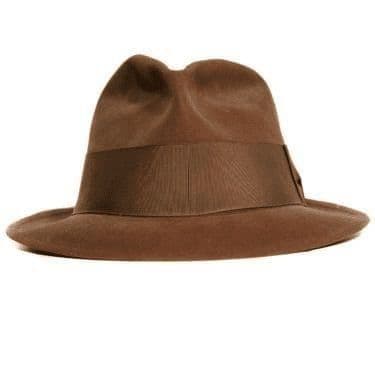 Whilst the name can be traced to the heroine "Trilby" O'Ferrall in a play adapton of George du Maurier's 1895 Novel, who wore the specific style of hat on the stage; The hat was obviously made prior to the play, in order for the person to wear it on stage.

The name likewise comes from a play's heroine; Princess "Fédora" in an adaption of Victorien Sardou’s 1882 play, who wore the style of hat on the stage. Like the Trilby, a Fedora is traditionally a felt hat, but can be also made in straw or cloth. Again like the Trilby, the Fedora has a crease on the top of the crown, and two dents either side at the front.

The principle difference between a Fedora and a Trilby has been debated many times. They could be the same hat, as in the America's the Name Fedora was more popular than the Trilby. Nowadays we consider the primary difference between them is the brim width. A Fedora when measured at the front of the brim has a width of 2 inches or more.

A Fedora hat was famously worn by the film character Indiana Jones. It remains a firm favourite of hat wearers to this day; A brown felt Fedora, is still used by Guards Officers for when dressing in civvies, as classic Town and Country headwear as within the Racing fraternity. 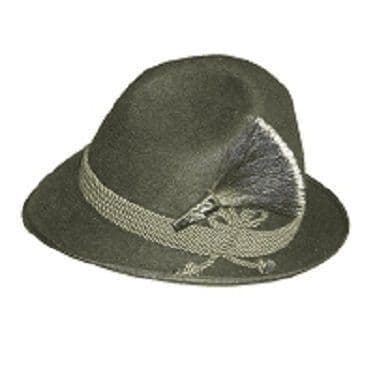 Possibly the ancestor of the Trilby; the Tyrolean Hat is typically made in a green felt (though other colours are popular including grey). It is also known as a Bavarian hat, or an Alpine hat, due to the popularity of the headwear style in Tyrol region of the Alps.

The Tyrolean Hat is also finished with a corded hatband and a Gamsbart brush at the left side of the crown made from the beard hair of the Chamois goat, and traditionally a hunting trophy, the Gamsbart can also be finished with flowers or feathers, similar to English tradition of putting hunting pheasant feathers into the side of a hat.

The Tyrolean Hat is similar to Robin Hood style hat of the middle ages. Both are hunting hats, which have a common specification of a soft short brim and pointed front brim (which allows an archer to shoot a bow and arrow more easily), and green in colour for camouflage. It is still traditionally worn when attending Oktoberfest

Close
Don't Miss Out
Never miss out on our latest products and deals. Sign up to our free newsletter today!
Sign Up Now